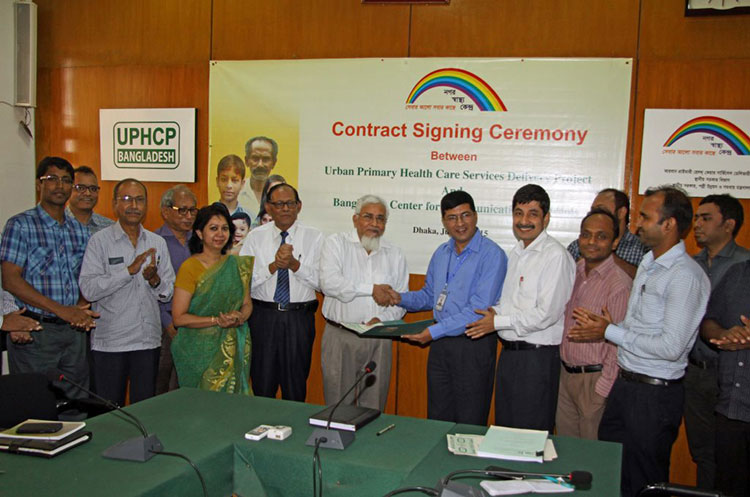 BCCP has signed a contract with the Urban Primary Health Care Services Delivery Project (UPHCSDP) on July 07, 2015 for providing Behavior Change Communication and Marketing (BCCM) services to the project. Working under the Local Government Division of the Ministry of Local Government, Rural Development and Cooperative, UPHCSDP provides health services to the urban population, particularly to the poor, through a number of clinics located in ten City Corporations and four selected Municipalities. Under the contract, BCCP will design and implement BCCM interventions with the ultimate objective of bringing about a positive change in the health service seeking behavior of the target population through promoting the services and the service centers of UPHCSDP, improving BCC capacity of the service providers and creating an enabling environment. Starting from July 01, 2015, BCCP will continue to work in this project till March 31, 2017.
The contract signing ceremony was held at the Project Management Unit (PMU) of UPHCSDP on July 07, 2015 at 2:30 p.m. Presided over by Mr. Abu Bakar Siddique, Project Director, UPHCSDP, the ceremony was attended by senior officials of PMU and BCCP. Mr. D. K. Nath, Staff Consultant, Urban Health, Bangladesh Resident Mission, ADB, Dhaka was also present on the occasion. Mr. D. K. Nath, Mr. Mohammad Shahjahan, Director & CEO, BCCP, Mr. Md. Sabirul Islam, Deputy Project Director (Admin. & Training), UPHCSDP and Ms. Yasmin Khan, Program Director, BCCP spoke on the occasion. The Project Director gave his concluding remarks. At the end of the signing ceremony, both the parties expressed the hope that with cooperation from each other, the desired accomplishments in the project could be made within this short period of time.