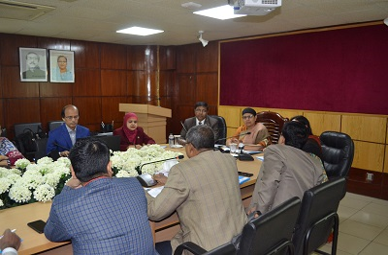 BCCWG became as an effective SBCC platform to bring continuity and consistency - Bugum Reena Parveen, Additional Secretary (PHWH), HSD, MoHFW
“The Behavior Change Communication Working Group (BCCWG) made a significant contribution and became as an effective GO-NGO platform by sharing, coordinating and collaborating to bring continuity and consistency in the SBCC interventions planned and implemented under HPN programs.” While making this comment Begum Reena Parveen, Additional Secretary (PHWH), HSD, MoHFW and Chairperson of the meeting also emphasized the use of ICT in further multiplication of the effect of SBCC in HPN sector.
This meeting was also attended by Mr. Nitish Chandra Sarker, Additional Secretary, FW&ME, MoHFW; as co-chairperson of the meeting. Dr. Ashrafunnesa, Director, IEM welcomed the participants of the meeting. Member units of the group under the MoHFW attended the meeting were; LHEP, BHE, IEM, NTP, NNS and Development Partners and NGO attendees were from USAID, Concern Worldwide, INCA, Sisimpur and the Plan International. The meeting had 5 presentations from NNS, Plan-International, INCA, BHE and IEM. 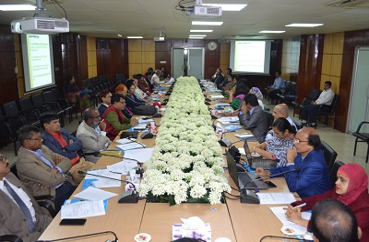 Key discussions and decisions:
-Reviewing progress of NGO mapping to support activation of the SBCC committees at the district and upazila level found not yet completed, as only few NGOs have responded it, will now be supplemented by a GoB circular on this issue across GoB and NGO fields.
-Updates and plan for HPN SBCC annual monitoring report collection, compilation and publication have been agreed on to get rolled over.
-Change of holding of the BCCWG meeting’s sequential interval period to reduce to 2 months from 3 months has reasonable grounds but should be considered to apply it for only unavoidable situation not as a common practice.
-Friendship-Bangladesh have been accepted as a member of the BCCWG
-An assessment to find non-active NGO members of BCCWG will be made by a 7-member committee as formed in this meeting.
-Member organizations Best Practice and Success Stories will be encouraged to present in the BCCWG meeting for scaling up and replication.