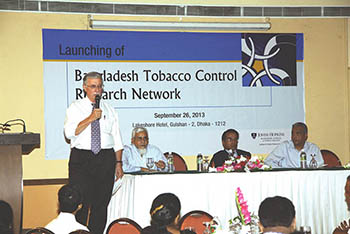 Globally, more than five million people die each year due to tobacco-related illness, a figure apprehended to alarmingly increase to more than 8 million by 2030. Bangladesh is also overburdened with tobacco-related ailments and, according to a WHO survey in 2004, an estimated 57,000 people died of tobacco-related diseases in the country. Tobacco control is considered a low priority issue in Bangladesh compared to other health-related programs. Thus, tobacco control-related research has historically not been a popular topic within the academic community, eventually relevant research journals are limited; and, there is no platform where potential tobacco control researchers can get support and guidance from.

Against this backdrop, BCCP with funding from the Bloomberg Philanthropies through JHSPH, Baltimore, USA formed the Bangladesh Tobacco Control Research Network (BTCRN) through a Research Network Kick-off Meeting held in April 2013. The BTCRN was launched in September 2013. More than a hundred faculties and researchers of different universities, institutions and organizations expressed a wish to join the network.

Since its inception, the BTCRN has been serving as a platform for providing support and guidance to potential tobacco control researchers in Bangladesh for the overall purpose of developing a local evidence-based research repository to enhance effective tobacco control policy development and implementation.

The BTCRN offers both institutional and individual membership, including student membership. Any Bangladeshi university, institution, national and local NGO, government organization, and individuals who are interested in tobacco control and signs a declaration that they are in no way affiliated with the tobacco industry, including engaging in advertising or distribution of tobacco or tobacco-related products can be a member of this network.