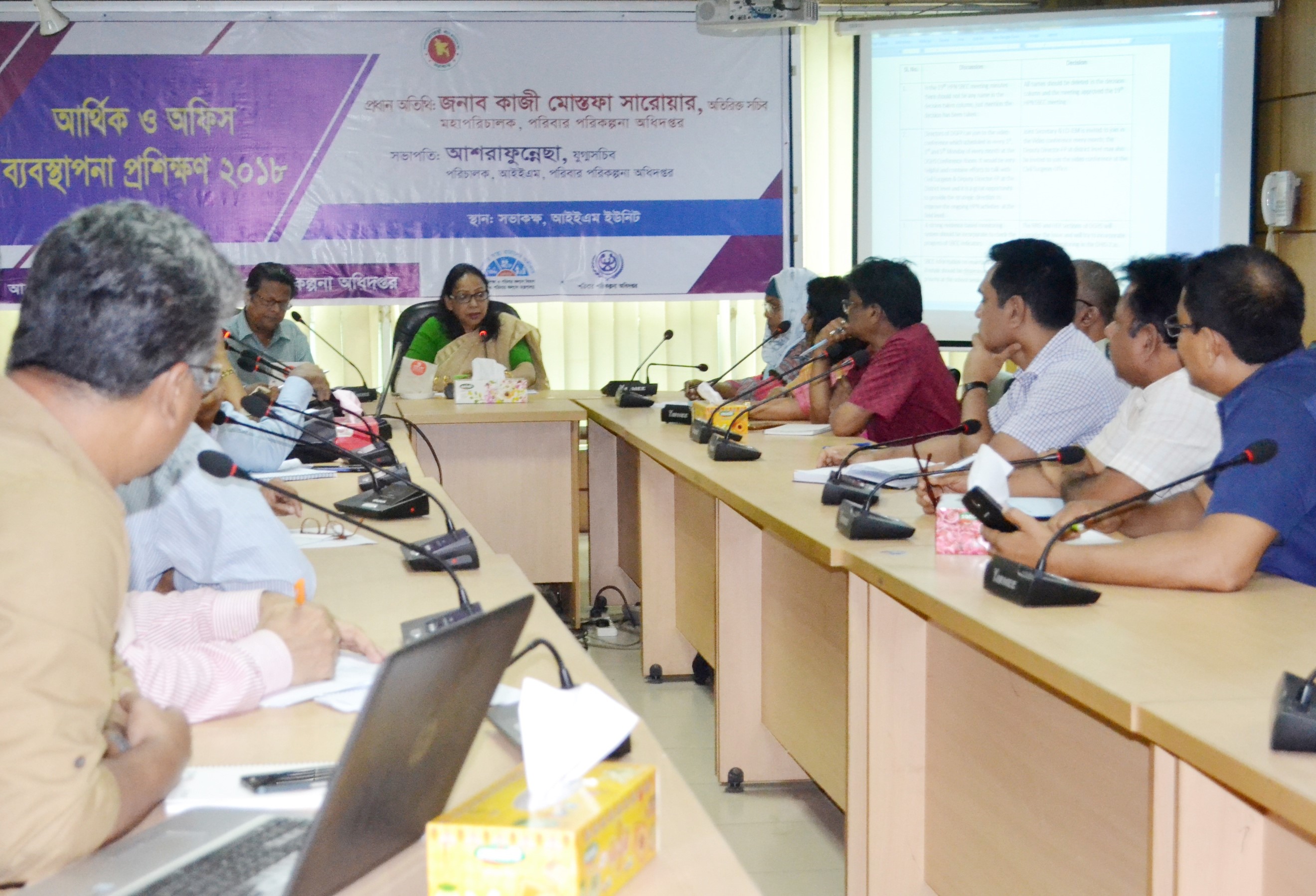 The 21st HPN Coordination Meeting was held on July 30, 2018, at 3:00 P.M. in the IEM Conference Room of the DGFP. The meeting was presided over Ms. Ashrafunnesa, Joint Secretary and Director-IEM while Dr. Shahed Iqbal Md. Mahbubur Rahman, Joint Secretary and Director-Planning of DGFP and Mr. Azmal Hossain, PMS-SBCC, USAID were also present in the meeting as special guest. This meeting was attended by representatives from the BHE, IEM and IPHN units including representation from the other units of DGFP and DGHS as; TBL, CCSDP, MCH and FSD.
In the meeting IEM, IPHN and BHE shared following key activities with anticipation and exploration for any possible cooperation and collaboration between three units:
IPHN:
- The National Nutrition Week and the Vitamin-A campaign has been observed throughout the country. These events were comprised of community-level meetings, mass media appearance through TV, Radio and newspaper
- The Vitamin-A campaign had a target to reach to a number of 1,93,98,533 children of the age group of 12-59 months and to 25,16,900 children of 6-11 months
- An app for REAL TIME MONITORING has been developed to enhance ability to respond quickly as the event is occurring and allow monitoring of activities as it happens on site or app and also reports are updated continuously
- Updated National IYCF Strategy and National IYCF communication Framework & Plan
- Developed Adolescent Nutrition Guideline and Geriatric Nutrition Strategy and the Behavior Change Interventions (BCI)
- Yearly update e-toolkits and Digital Archive.
BHE:
- 5-days training on Environmental & Occupational Health Awareness provided to 20 district level Health Educators
- 13-days Basic Training on Health Education and Promotion provided to 30 district level Health Educators
- School Health is identified as one of the common activities that addressed by BHE, IPHN, TB-L of DGHS and IEM Unit of DGFP. With the support of Ujjiban, a School Health Curriculum is developed by the IEM Unit, DGFP that covers all three health components of Health, Population and Nutrition. Adaptation of this curriculum is in consideration and discussions is going on with IPHN, CBHC, TB-L and School Health Program of MNC&AH as all of these unit’s key objective is to provide comprehensive health messages covering all three components to the school students
- Organizational Capacity Assessment Tool has again been processed for 2018 to assess the strength and weakness of BHE on SBCC Capacity and Knowledge Management perspective
- The baseline survey on lifestyle has been conducted to understand people’s perception on healthy lifestyle in urban and rural areas in collaboration with NIPSOM and the result will be shared in August 2018.
IEM:
- A call center named as “Sukhi Paribar” has been launched to provide FP, ANC, PNC, MH, AH, N&CH and Nutrition to provide public information on those services for 24/7 hours
- 2 urban campaigns have been conducted with the objective to raise awareness on the consequences of child marriage and teenage pregn 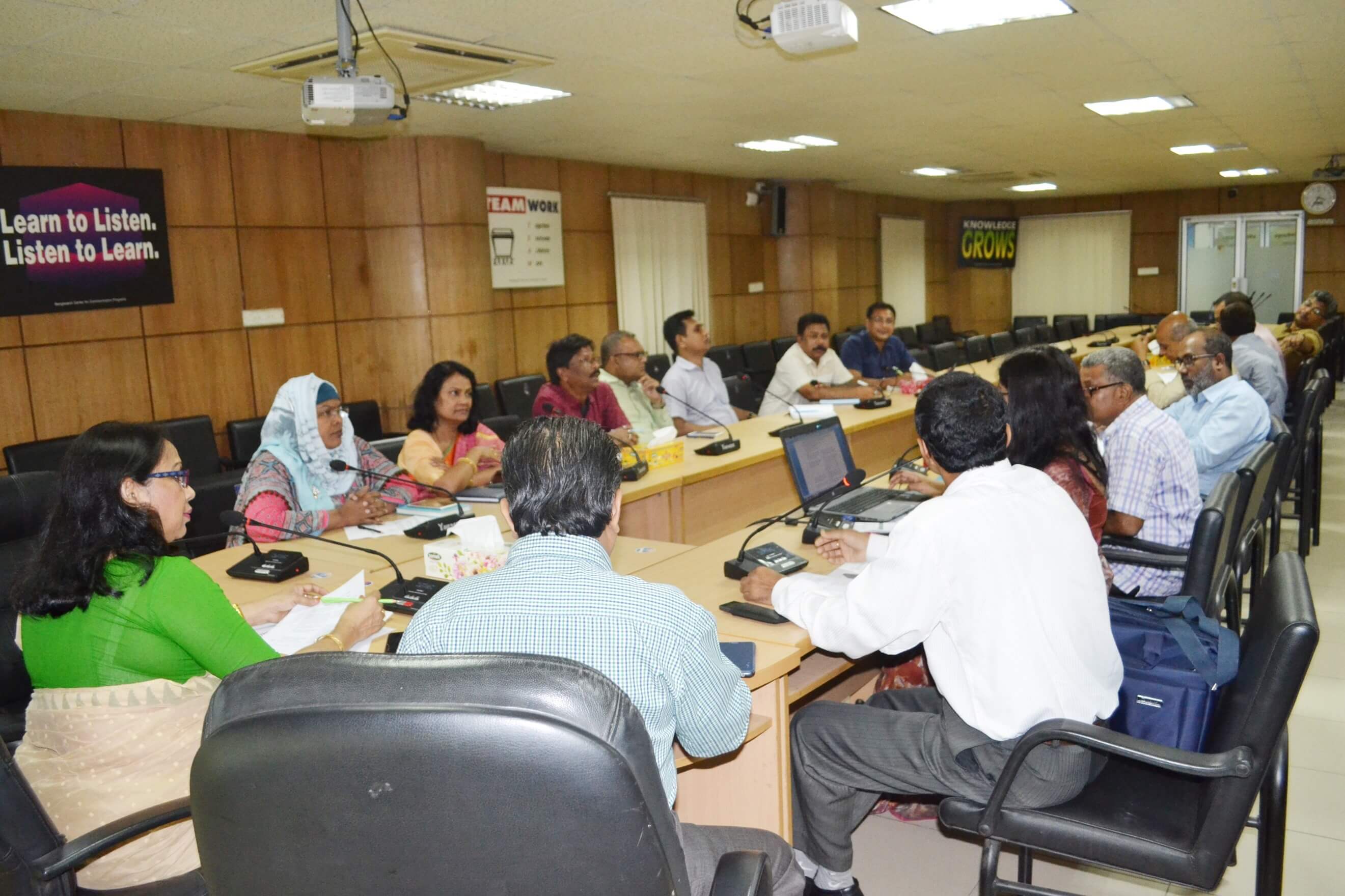 ancy, ARH, personal hygiene (including sanitary napkin) as well as small family norms for the slum dwellers, garment workers and school going adolescent
- Divisional Level community dialogue intends to mobilize divisional level key stakeholders to support FP-MNCH initiatives has been conducted in 7 districts of Dhaka and Mymensingh
- The School Health Curriculum is available for being used at Schools to raise awareness among students (VI-X) on Health, Family Planning and Nutrition. Up to now a total of 650 SACMOs in 19 districts were trained to conduct session at school
- The World Population Day was observed throughout the country combining various events in TV, Radio, Newspaper, Social Media and in community level campaigns
- Upcoming event includes; a 4-day Message Development Workshop, Pre-marital Counselling Guidebook and findings sharing of formative research for assessing exposure and effectiveness of IEC/SBCC interventions.
Following issues had come up as point of coordination and collaboration:
- HPN Coordination Meeting will also focus on inter-unit coordination issues along with the review of implementation and upcoming program issues. The coordination issues be mentioned beside the action issues
- Bring these coordination issues to the district level officials for their information and better field level coordination
- All HPN units will consider adaptation of School Health Curriculum as developed by IEM Unit as it has covered all three HPN components.
The next meeting of the coordination committee will be held under the auspices of IEM in the October 07, 2018.
At the end, the chairperson anticipated for a better and improved coordination mechanism between different units as being paved through the HPN Coordination Committee supported by USAID-Ujjiban project.